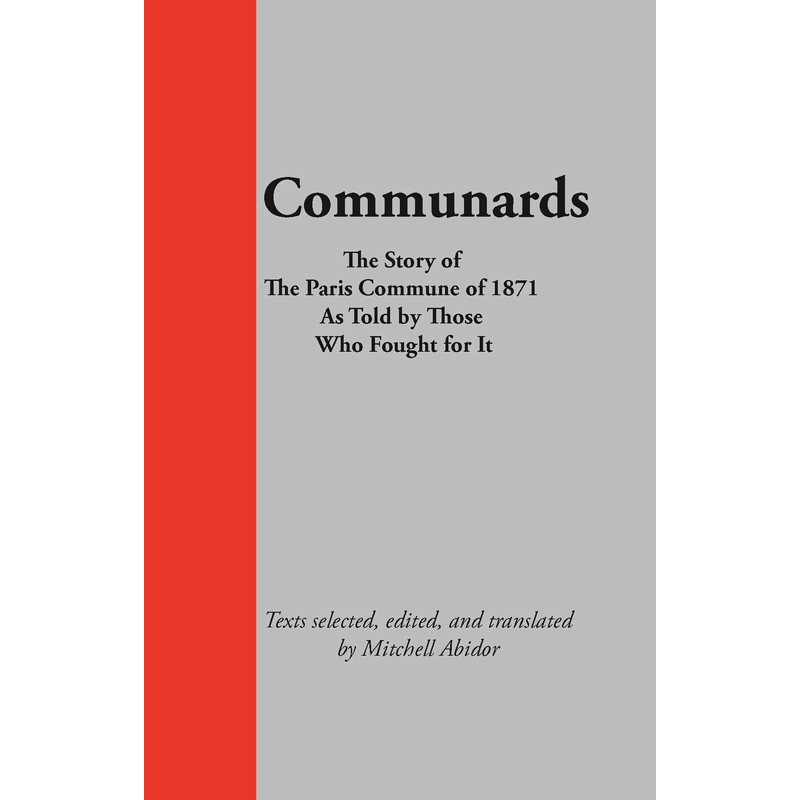 Communards:
The Story of the Paris Commune of 1871,
As Told by Those Who Fought for It

Communards: The Story of the Paris Commune of 1871, As Told by Those Who Fought for It. Texts selected, edited, and translated by Mitchell Abidor.  Published by Marxists Internet Archive Publications, 2010.

In this unique collection of texts translated into English for the first time, we hear the genuine voices of the Paris Commune of 1871. Every Communard drew something different from the experience of the Commune, and Communards allows all of them to have their say.

“If socialism wasn’t born of the Commune, it is from the Commune that dates that portion of international revolution that no longer wants to give battle in a city in order to be surrounded and crushed, but which instead wants, at the head of the proletarians of each and every country, to attack national and international reaction and put an end to the capitalist regime.”

— Edouard Vaillant, a member of the Paris Commune.

Documents include the records of stormy meetings of the Commune deciding on the execution of hostages, minutes of meetings of the First International throughout the siege as well as reminiscences of participants written down 25 years after the event. Much of this would be new to French-speakers; it is all-new for those who do not normally read in the French language. No history of the Commune may be written in the future without reference to Communards.

Communards is available only through Erythros Press and Media LLC and proceeds go towards the operations of the Marxists Internet Archive.

About the author:  Mitchell Abidor is a writer and translator living in Brooklyn, New York. He has translated hundreds of texts from French, Spanish, Italian, Esperanto and Portuguese into English, including works by writers as diverse as Jean-Paul Sartre, Antonio Gramsci, the Argentine poet Juan Gelman, and Maximilien Robespierre. Mitchell is also a regular columnist for the French magazine Le Grognard. He is married to the artist Joan Levinson. He is also the author of The Great Anger: Ultra-Revolutionary Writing in France from the Atheist Priest to the Bonnot Gang.